The historic Shaw Street School is 100 years old and Artscape Youngplace is throwing a community birthday party on Sunday, September 7 to mark the occasion! Join us for 100 Years of Creativity, presented by Catherine Gordon RE/MAX Hallmark Realty Ltd, as we pay tribute to the history of this reborn building and look forward to another century of artistic growth and inspiration at Artscape Youngplace with an afternoon of drop-in art activities, cupcake decorating, guided tours, tasty treats and more.

END_OF_DOCUMENT_TOKEN_TO_BE_REPLACED

And now, another photo from the archives of 180 Shaw Street. This is the boys’ relay team in 1932. Students of this school were renowned for their athletic prowess. Our community researchers in 2013 uncovered this wonderful history:

“All sports were valued at Givins, but track and field was the most highly regarded. Practices were held during the school day, and coaches and students would leave class to attend, “for the good of the school.” In the 1950s and 1960s, and likely earlier too, it was forbidden to open doors in the school  between 3:30 and 4:00 pm on certain days, because relay teams were practicing in the halls. Former students recall the school had a peculiar smell at those times: the school created its own liniment for athletes, called Tiger Milk, to soothe muscles. Only a handful of coaches were privy to its recipe, though it was rumored to include milk, mint and turpentine, among other ingredients. Clarence Stiver, former coach and archivist at Givins, suggested the real point of it may have been to intimidate teams with the overpowering smell.

The hard work (and the Tiger Milk) paid off.  In the early days of the Toronto Public School Board, large track championships were held annually at the Canadian National Exhibition Grounds. Givins won the city championship an astonishing fifty-one times in a row, from 1898 to 1949. There was a celebration at city hall following the school’s successful 50th championship in 1948, where a commemorative certificate and the key to the city were presented to the principal.”

Our community researchers performed archival and first-person research to discover the stories from years past associated with the building that is now Artscape Youngplace. We were delighted by what they uncovered. Keep your eyes on this News page for more histories from the vault. And say three cheers for our researchers! Hip, hip, hooray!

In this series of posts about the history of 180 Shaw Street and its site, we’ll be sharing the information contained in our permanent “history wall” located near the front entrance of Artscape Youngplace.

There were several buildings occupying the site where the current Artscape Youngplace building now stands. The first was a one-room schoolhouse erected by the Toronto Public School Board in 1848. It was one of two local schools to mix boys and girls in the same classroom, and was constructed on the Givins estate.

After the school board acquired additional land from this estate, it replaced the one-room schoolhouse with a two-roomed building that would better service the increasing population of the area. This new building was renamed the Givins School in 1860. 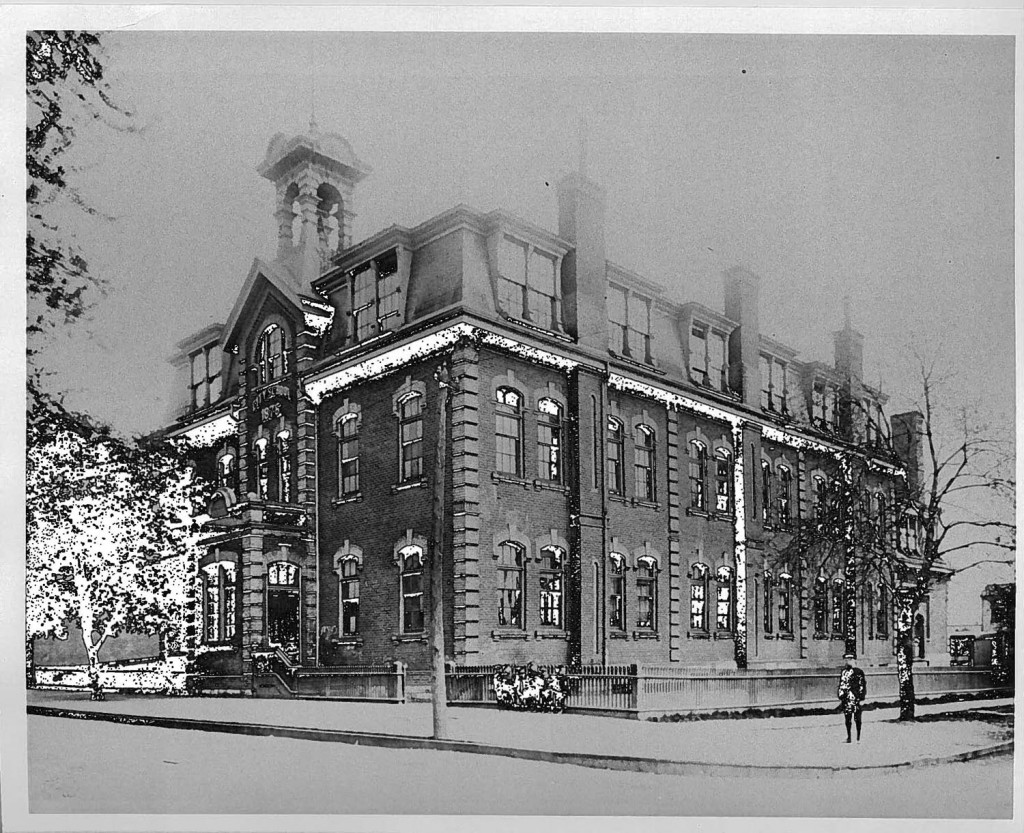 A third building was constructed on the site in 1876, including 21 classrooms (above). The building now at 180 Shaw Street (below) was erected in 1914 under the direction and supervision of C. H. Bishop, an architect and long-serving Superintendent of Buildings for the Toronto Board of Education. 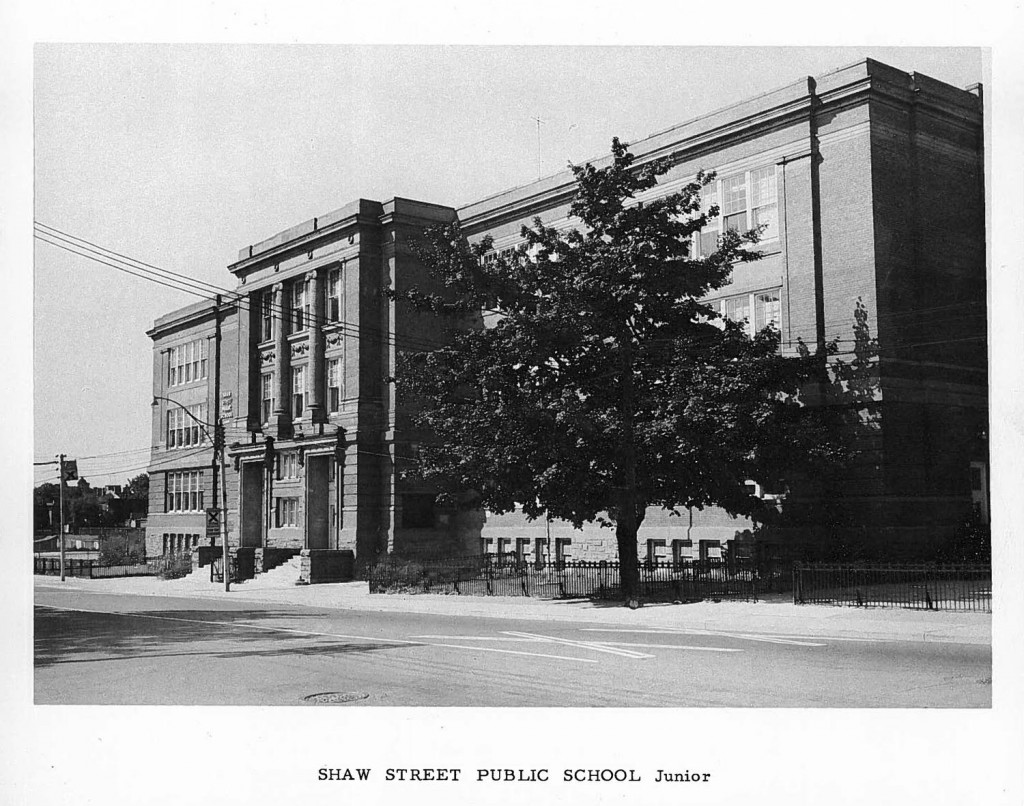 In her article “How an old school building is bringing artists back to Queen West,” which ran in the Globe and Mail’s Toronto section this past weekend, writer Zosia Bielski highlights many of the unique characteristics of Artscape Youngplace: its history as a school, its situation within the broader context of the neighbourhood and the unique model underpinning its operations. It’s the perfect piece for anyone looking for a primer on what makes Artscape Youngplace unique.

Marta Legrady is the last principal to have worked at 180 Shaw Street when it was a school. She says, ‘“Given the history here, given the community, this is absolutely the right thing to do with this building” … “If this had become some fake-chic, condo type-place that would bother me a lot. We’ve got more than enough of those.”’

It took a tremendous, concerted effort by a number of parties to create Artscape Youngplace, and this article tells the story of how it went from vacant building to a bright, secure new facility totally up to building code. Bielski notes the many advantages Artscape Youngplace holds for artists and members of the community, but perhaps most touching are the notes from former students and teachers, among them Beatrice Morris.

‘Ms. Morris’s blue eyes shone as she took in the celebration. “For the years the school was closed, I thought what a waste. It was such a nice building, it’s terrible to leave it sitting here. Then Artscape said they were coming in and I thought, I don’t even know what an Artscape is. I think it’s beautiful.”’

We’re very happy to be featured in the TORONTOIST today. Writer Steve Kupferman does a great job of highlighting some of the historical facts that make Artscape Youngplace so special, and draws attention to the unique model we’ve used to restore this community gem as a cultural hub. The photo gallery gives a great “sneak peek” of some of the things to see inside the building once it opens. Read the article and get the scoop.

Upon entering on the Shaw Street side, visitors to Artscape Youngplace are greeted by an engaging historical timeline of the building and its site. This permanent exhibit was created a joint effort between researchers working during the lead-up to our public opening and Debbie Adams of Adams + Associates Design Consultants Inc. The history wall uses images gleaned from the archives of neighbouring Givins/Shaw Public School, and photography by Garrison McArthur Photographers and Greg Edwards.

When we started the Artscape Youngplace project, we knew there had to be a century’s worth of stories associated with this 1914 building. What we discovered through the efforts of our fabulous researchers was a wealth of information all adding colour and dimension to our understanding of this place. We were very fortunate to attract such a talented team of professionals willing to contribute their time to this undertaking and conduct archival research, community surveying and first-person social history collection. We can’t thank you enough, Samantha Irvine, Heather Read and Tara Bursey!

For everyone interested in diving into the history of 180 Shaw Street—the building and the community—we’ll be rolling out stories featured in this timeline in our News section. Stay tuned to this page for more facts from the past.