Happy 2015, Toronto! We’re off to an exciting start here at Artscape Youngplace – with two unique artist-led talks & workshops coming up this Friday & Saturday. All are welcome at either – or both! – of these free events.
Read on for details! 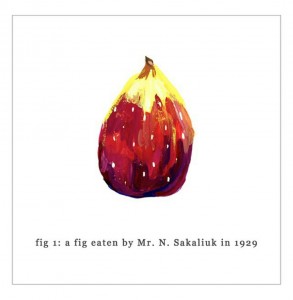 Join us for an evening of sampling dishes listed in a found food diary (c. 1929). The diary, a matchbook sized book chronicling Mr. N. Sakaliuk every meal and whether it was “good” or conversely “not very good,” was purchased at Monkey’s Paw bookstore by Toronto-based artist and designer Lewis Nicholson. Kobayashi and Nicholson will be in attendance, to present research and share personal narratives surrounding the food diary and their eclectic collections. Artist talk is free and open to all members of the public.

RSVP in advance to ayp@torontoartscape.on.ca. The event is free. 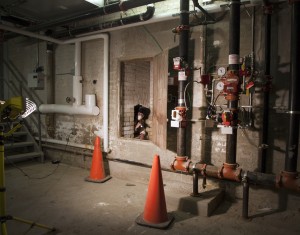 Christine Swintak, Further exploration of the area that will be bricked in after the capsule is placed, 2014-2015

In conjunction with her latest project, The Other Its, artist Christine Swintak will be leading a “timeless capsule” workshop, which offers the rare opportunity to contribute to the creation of a permanent relic only to be known by word of mouth. Participants will witness and participate in the official burial of the “timeless capsule” at the end of the workshop.

Things to bring to workshop:

1 to 5 medium to large size objects or up to 10 if the number includes smaller objects. Chosen objects must be non-flammable and non-combustible.

Imperfect Shadow is a multi-faceted and evolving exhibition about everyday parallel realities, inviting the exploration and re-exploration of the fictional and real, hidden and transitional spaces throughout Artscape Youngplace.

Alison S.M. Kobayashi (Toronto and Brooklyn) is an artist working in video, performance, installation and drawing. Often inspired by found narratives and overlooked fragments in life, her artistic practice reveals and eulogizes the inner fictional and non-fictional lives of objects their previous owners most often strangers. Eschewing grand written narratives, the artist is invested in the preservation and investigation of discarded or abandoned possessions of others as the more honest representations of the lived experience and how such objects play a role in telling personal mythologies. Kobayashi holds a BA from University of Toronto. She currently resides in Brooklyn, New York where she is the Director of Special Projects at UnionDocs, a Center for Documentary Art.

Christine Swintak (Toronto and Montreal) is an artist working in variety of media including sculpture, installation, performance and drawing. Approaching the world as her studio, her large-scale commission-based practice has included building the most banal rollercoaster ever made in a corporate office building, moving almost an entire cottage by hand without the aid of machinery, building a full-size ship through collective improvisation, running an election party campaign for the Irish underworld, transforming a city-issued dumpster into a fully-operational luxury boutique hotel, attempting to give a shed consciousness and producing a series of impossible project proposals. Swintak graduated from NSCAD University in 2003, and was awarded the prestigious Canada Council International Residency at Cite Internationale Des Arts in Paris, 2011. She is currently pursuing her MFA at Concordia University.

To help maintain community safety and contain the spread of COVID-19, Artscape has temporarily closed its facilities to the public and cancelled all Artscape-led programming. We will be monitoring public health and government recommendations regarding the reopening of non-essential businesses and public gatherings to guide our decision on a re-opening date.