The Toronto Fringe Festival runs from July 5 to 16, 2017, with live performances happening across the city.  Escape the summer heat and catch a show (or four) at Artscape Youngplace. Here is the list of Fringe shows we have going on: 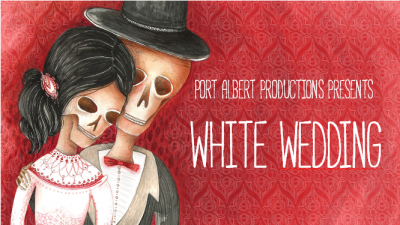 Lisa and her brilliantly analytical mind are having trouble understanding why we spend so much time celebrating painful emotions like love. Will attending her childhood best friend’s wedding at her old high school help clear things up? Maybe she should just hide upstairs.

White Wedding is a new site specific play written and directed by Taylor Marie Graham premiering at the 2017 Toronto Fringe. This bizarre comedy explores those inevitable life questions that come up after all the anticipation of a wedding is over. Who are we really? And what is the point of it all?

This is Not She by Julia Haist 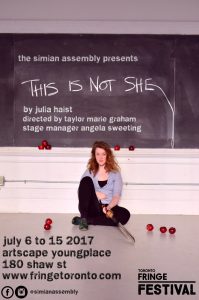 It’s the first day of the new semester, and the grade eleven Shakespeare unit! Take your seat, open your books, and if something seems a little off about Mrs. Lee-Humbert, it’s not just you.

This is Not She is an interactive solo show written and performed by Julia Haist that explores the relationship between teacher and student, taking dark and unexpected turns along the way. Audience members can expect to read from one of Shakespeare’s more obscure plays, Troilus and Cressida, share their own thoughts on love and war, and get to know their teacher far more intimately than anyone anticipated, including the teacher herself. 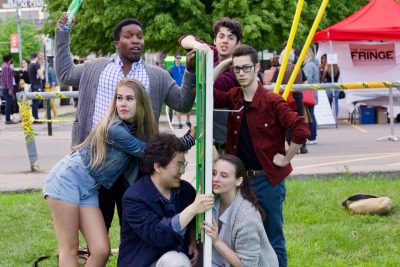 Society has been separated by a wall. Witness the story of a revolution? But only from one side. Set in a not so distant Toronto, this is a dystopian story where a wall runs down the middle of the city and the wealthy leaders have banished anyone of minority to live on the other side. The audience will be split in two, and only watch from one side of the wall; they will only catch half of the story. This creation process has doubled as an experiment in theatrical techniques. Our cast members are in the same situation as our audience will be. Until the cast party after The Fringe, our actors will have no idea what happens on the opposite side of the wall. The reality of the fear and paranoia is magnified when the actors don’t even know if their loved ones are safe, or if their friends are really on their side.

Written and Directed by Jake Fulton (XXXposed – Broadway World Audience choice nominee, The Larami Project– Orlando Fundraiser), and starring a group of students, recent grads, and seasoned professionals, this is the perfect opportunity to see what a diverse and compelling community the Toronto theatre is.

What would happen if all of Trump’s promises came true? The world – and the audience – will be divided?

The Food Project by Theatre By Committee

“Where does my food come from?” “How is it grown?” “What is the cost to the environment?” The Food Project encourages Canadians to question the cultural, environmental, and economic impact of our own food system. Join us as we cook, prepare, and investigate the complicated journey from the field to your mouth. Featuring an original script created by the company, songs, and maybe even a puppet or two, don’t miss Theatre by Committee at the Fringe!

Tickets: Day-of tickets will be on sale in the front entrance of Artscape Youngplace, 1 hour prior to show time