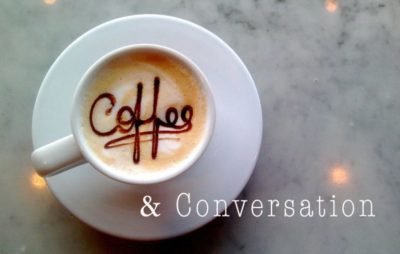 Coffee & Conversation is excited to share this interview with the talented Lyla Rye. Lyla is well renowned artist who has exhibited all over Canada, and internationally. Her work explores the use of digital photography and architectural space. It was an absolute pleasure to have the opportunity to interview her.

I started out studying architecture and then moved into fine arts. The work developed over the years from object based sculpture to room scale installations. About 20 years ago I added video into the mix and these pieces are shown predominately in room scaled installations. Since I’ve been here at Artscape I’ve been exclusively making art and running my own business called ‘Mentor Lyla Rye’ where I mentor visual artists through workshops and individual consultations.

What’s great about this space is the community of other artists in the building. Having some place communal like the café where you can randomly meet people is really nice. I also find the view from my studio to be really inspiring.

I have a personal connection to this building as well. My first apartment after I finished University was on Argyle Street and my studio was one of the front rooms. I looked at this building everyday – and this was back in 1989!

And then, just before the building got transferred to Artscape, Heather Nicol, who also in the building, curated a show called “Art School Dismissed”, which was made up of mid-career artists who teach – taking over the classrooms, and I was in that show. I showed in the studio directly beneath my studio now. Then I was invited to be the inaugural exhibition at Typology gallery which has since been renamed Critical Distance and is just down the hall.

It just seemed like for so many reasons I was meant to be in this building.

I’ve been looking at this building from the outside since 1989, and the first show I was in was in 2010. I’ve had interactions with this building as Artscape since 2013 when it first opened, and been a tenant for 2 years.

I’m working on a series of animations using cellphone videos with digital effects to create 3D illusions. Using graphic shapes and different methods of special depictions, I create illusions of space, but then they don’t quite work. I’m interested in when the illusions betray the fact that they’re only illusions of three-dimensional space.

I would describe it as walking through a house you don’t know, in the dark with your arms extended. There’s an inkling of where it’s going, but it’s a lot of asking “Why am I doing this?”, and “What does this mean?” It is about the ideas that niggle in the back of your brain but don’t go away, those are the ones that you have to pursue.

Yeah, but for me those ideas are not fully formed until I finish. At the beginning they are just a grain of sand and it’s the making that creates the pearl. The idea is just a grain of sand, that’s all it is. It’s not anything special, it’s not divine intervention, it is just the tiniest niggle of thought – but in the making you try to figure it out, flesh it out, and try to understand it.

I’m sure you’ve met a lot of aspiring artists, you must have tons of experience.

What I am doing now is a little bit different in that I’m acting more as a mentor or consultant. What I love about that is that the people who come to me are driven in their making already. I don’t have to inspire those urges – it’s already there. It’s just about talking to them about their practice and asking questions that maybe they’ve never asked themselves. Questions about why they do things a certain way or why they’re going down a certain path, and through these questions, making them aware of other artists and other possible approaches; hopefully without ever dictating something that I think is right. I will often say, “I’ll give you this example, but you should come up with your own idea, and it will be better because it is integrated in your way of thinking.”

I also get to help people with the professional side of the practice – like with grant writing, statement editing, and all that nitty-gritty stuff that nobody likes doing but is completely necessary. A lot of it is just giving some of my knowledge, some confidence, and some challenges.

No, I could not have ever fathomed this. I mean, I feel very, very lucky to be able to work on my art and work with other artists’ full time, in my own studio.

It’s cool how life takes you on a path, and sometimes you just don’t know where it’s going to go.

I think that’s the definition of life! You don’t know where it goes no matter your best intentions and all your planning. It’s the same with being an artist, you don’t know what you’ll be making in 5 years, and you don’t know what opportunities might just fall in your lap. For all the stuff you put out there, the very best things are the things that just felt like random gifts from the universe.

I’m a bit of a jock. I did competitive gymnastics, down-hill skiing and spring-board diving when I was a teenager. I still ski, I like my rowing machine [points to the rowing machine behind her], and I do Pilates every day.

I feel like being in your body and understanding how it works, and having it work well is a joy. To me there is a similarity to understanding how your body works and art; it’s the process of learning how to do something.  I think with artwork you’re always learning something new, even if it’s just as simple as “what will happen if I put this particular purple beside this particular lime green – will that be hideous, or will that be glorious?” and how do you decide what is hideous and what’s glorious?

Probably one of my fondest memories is my friend Eve Egoyan – who has a studio on this floor- doing a concert in her studio. It’s pretty special to be that close to a grand piano, with a small group of people and also just seeing her total focus and virtuosity. I think she’s amazing, and she’s the sweetest person in the universe.

Find out more about Lyla: