The Centre for Indigenous Theatre has been a longtime tenant here at AYP. We sat down with Artistic Director and Principal Rose Stella to talk about their experience being in the building, and the kinds of impact CIT grads are making in the arts and culture sector.

“Feeling worthy of education, and love, and family opens more doors for everyone. It’s hard to feel worthy when you come from so much broken things all around. It’s good to see things being repaired…people feeling repaired, and then helping do more repair.”

What is the Centre for Indigenous Theatre?

Rose: We’re a culturally based training program, so we do a lot of work with various pedagogies of Indigenous ways of teaching but we combine it with modern contemporary ways of teaching theatre. We are a 3 year certificate program, but we recently added a 4th year.

We teach voice, movement, dance, writing, playwriting, and story creation. In Story Creation work – we use traditional, personal or imagined stories to create a play; this gives each student a voice in the productions. It’s a cornerstone of our work. It is also the first stepping stone to playwriting.  We also do some on-camera work but it’s the very basics, so anyone after doing our 3 year training who really wants to do film, we really recommend that they go on to do specific training in that work. If they want to be behind the camera, there are places to go to do that kind of work.

James Buller founded the school in 1974. He really believed that working and training in the arts would help build confidence and help heal the heart and soul of the Indigenous people in Canada and across Turtle Island. And I really do believe that his instincts were very correct.  We’re one of the few Indigenous theatre schools with a very clear curriculum and a body of performance work. We have a very focused idea of what our goals and our outcomes should be for our students.

And how do you help the students find their voices?

Rose:  Through the work…the training. Through the writing and also the plays we choose to present.  There’s a Commedia dell’arte play called The Servant of Two Masters, where a servant tries to work for two masters and gets into all kinds of trouble. We did an Indigenous version and placed it in Northern Ontario during the prohibition era. It was our take on it, and it was a lot of fun. We took the play and translated it into an Indigenous viewpoint, with an era-based idea. We also did a play called Jumping Mouse, which is taken from an Indigenous story about a little mouse that is generous and travels its land from its little viewpoint, but because it was so kind and generous of a mouse, it becomes an eagle; the spirits give it wings so it can see everywhere. We also did a comedy based on Midsummer’s Night’s Dream. It’s called The Red Moon, and is an Indigenous take on the play by a Cree comic and playwright Dawn Dumont. So, through the creation of their own work and through the performance of plays created by other Indigenous artists – our students can find their voice and also have an opportunity to exercise the training they received all year.

The training they do to get there, our senior students (2nd, 3rd and 4th years) work on their Voice, and do scene study and physical theatre work. Physical theatre work helps each student build character, but also finds a way to work physically where they’re not going to harm themselves. They do all kinds of training for the entire year to prepare them to perform a really big show like this. Throughout the year we also do small presentations. The 1st years do a smaller, scaled down version of a production of story creation in March in our studios.  In December, the seniors present their Story Creation work at Aki Studio at Daniels Spectrum (another Artscape building). Aki Studio is Native Earth Performing Arts’ theatre; we try to collaborate with them as much as possible, and have our students work there whenever we can.

“It really is a lovely inspiring environment here, and it’s great for the students.”

How long have you been inside Artscape Youngplace?

Rose:  As soon as the doors were open. We took possession of it in December 2013, and we moved our students and classes here in January of 2014. I believe that’s when it opened. Artscape usually does events in the fall, and when they did theirs that year, people had to wear hard hats when they came into our space.

We love being here. We really love that for the first time ever, we’re in a space where our offices are in the same place as our students working. It’s enormously amazing. It’s also amazing to be across the hall from SKETCH. We do a lot of work with them, and we try to collaborate as much as we can. The space share is a big part of how we help each other.

Being around a creative community must be very inspiring

Rose: Yes, it’s very inspiring to be around so much creativity. Our window at our old offices overlooked the daycare, and I feel like we have some of the same joyful things happening with the children here because of the kids playing in the playground, and the rambunctious kids who come here at lunch and the daycare in the basement. It really is a lovely inspiring environment here, and it’s great for the students. I can talk from an administrative point of view that it’s great to be here, but for the students to have so much green space, to have the park, to have the things that SKETCH offers. They offer a lot to of our students, and a lot to our organization. And being so close to a community that is residential – not just downtown offices & stores…there’s just something special about the feeling in this area that we all love.

Do you have any memorable moments while being in the building?

Rose: I have memorable moments during the fundraising events that Artscape put on. When we first moved in they had one where participants of the fundraising event went from space to space like they were in school – a school bell rang, and off they went to the next class. Our studio hosted improv classes facilitated by one of our faculty with our students. It was a black tie event so they were dressed in evening clothes and pearls – and in our space – hard hats. It was so much fun to watch, especially after they’d had a few martinis. The participants really had fun in our space and enjoyed working with our students; they had such a good sense of humour and so willing to jump in and enjoy the craziness of improvisation.

What is the most rewarding part about working with your students?

Rose: I think the most rewarding part is seeing how a student can change from being unsure about themselves to knowing what they want for themselves. People lack confidence, in even the simplest things. They don’t speak up, they don’t say what they want, even something as simple as “I want to get an education.” A lot of our students don’t feel worthy of that, and for the most part what our students gain from being here is feeling worthy. That’s a big thing for me, having a student leave here feeling worthy of an education and being happy. It means that all of a sudden they can actually use the education here. Seeing them go forward, and get agents, and start creating their own work. That means that they’re thinking, and goal-setting, and it’s exciting to see young people setting goals, trying to figure out how to get them, and how to ask for help. Some of these students never saw themselves leaving the reserve, or being able to take anything back to the reserve where they can help their community. That’s all changing now. That’s changing big time. 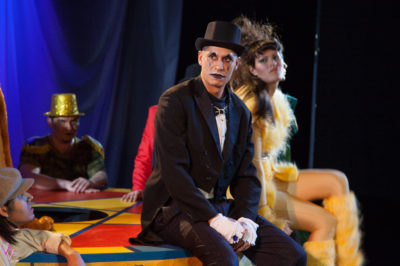 What are you most excited about for Indigenous theatre and the arts?

Rose: I think I’m most excited about strong and confident voices coming forth. It was really important to tell our stories of the hardships, and those stories are really relevant. You know it’s like you open a wound and you tell a story, it’s going to be a sad story. I think now, our artists are finding ways to tell stories with a sense of healing and hope. New generations who are talking about the things that have happened in Canada, but find strength through the trauma in the telling of these stories. People will leave the theatre in hearing these stories, educated but feeling hopeful for our people. In telling the story there’s strength. That is the most important thing. I think you need to feel change when you leave the theatre. You need to feel change, but you need to not feel devastated. When you talk about residential schools in any kind of play, the fact that we’re talking about it is hopeful. I value our playwrights, I value our story tellers so much, I’m so grateful to them, because a lot of the story telling is so brave, and the actors that take it on to tell the stories are also brave, so I’m pretty hopeful. You know, our own stories are going to continue to grow, and we’ll have new discoveries, and Canada is having new discoveries every day of how its history impacts all Canadians.

What kind of impact does CIT have on the cultural landscape?

Rose: That’s a big question. I like it. I wonder if I can answer it! It’s a really important question. Across Canada, these individuals (Rose pointed to an old photo of group of people at the Native Theatre School on her wall) are all doing great things in the cultural sector. One of them is the head of the Indigenous sector at Banff now, as well as directing at Stratford (Reneltta Arluk). It’s the first time ever, you know having an Indigenous person directing at Stratford. That’s a huge impact, that voice, that vision, bringing in Indigenous actors to Stratford. That’s a student that was here. She’s now doing really important things.

Students of ours that are actually going back to their community and have decided to use their theatrical training to do ARTS in their community; to help others there to have a voice;  to stand up and make their voice heard. There’s a lot of work being done…. Not just theatre, but artists who are out there, and creating art that says “we’re standing here for the water.” Many of those activists are painters, sculptors, actors, writers.

James Buller quoted Louis Riel when he started Native Theatre School: “My people will sleep for 100 years, but when they awake it will be the artists who give their spirit back.” And James Buller really believed that, and he worked tirelessly to build the Native Theatre School, and give a place for Indigenous people to find their artistry, whatever it was. Feeling worthy of education, and love, and family opens more doors for everyone. It’s hard to feel worthy when you come from so much broken things all around. It’s good to see things being repaired…people feeling repaired, and then helping do more repair.